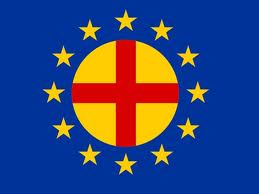 The International Paneuropean Union (IPU) – through the Coudenhove-Kalergi Foundation – had
tied several decades ago particular links with the University of Geneva to whom it entrusted its
archives. Till the end of 2011, these archives were in the Castle of Coppet near Geneva (where
lived Necker and his daughter Madame de Staël) where they were masterfully managed by Mr.
Lubor Jilek, curator in the Center of European archives of the University of Geneva. Yet, because
of structural changes within the University of Geneva, since 2 years these archives have not been
accessible any more to the researchers, what is at the same time regrettable and frustrating.
Today I have the pleasure to inform you that after negotiation with the authorities of the Canton of
Vaud, the aforementioned archives were transferred to Chavannes-près-Renens, not far from
Lausanne. The choice of this city is understandable by historic reasons. Richard Coudenhove-
Kalergi had indeed established the seat of the IPU in Lausanne in 1950 where it stayed during a
decade. Between 1975 and 1987, its General Secretary Vittorio Pons worked to the political union
of Europe from premises which the municipal authorities had given gracefully. It is also in
Lausanne where the European Price Coudenhove-Kalergi was awarded to personalities such as
Raymond Barre, Constantin Tsatsos, Sandro Pertini.
The archives of the IPU – which represent about 50 linear meters – were entrusted to the
« Archives Cantonales Vaudoises » (ACV) which will take particular care of them. Indeed, not
only they will be preserved from now on in the best possible conditions (shielded from water, fire,
dust, etc.) but especially, after a period of conditioning, classification and inventory – which will
last several months – they will again be put at the disposal of those that the European integration in
the XXth century interests and valued by means of the most modern ways offered by the
technology. A new impulse will so be given to these archives the historic value of which is not to
be any more demonstrated.
Geneva, October 21th, 2013